Having fun with English

CHAPTER I | Can greed ever be satisfied?

Genre Connection
Folklores or tales are traditional stories that are passed on from one
generation to another. These stories teach lessons of life. Every culture
around the world has a unique way of expressing traditions, beliefs and
values through folklores. Folklores are a way of passing on tradition and
culture from one generation to another. Folklores can be classified as fairy
tales, legends, oral history, tall tales, and fables. The study of folklores is
called folkloristic and people who study folklores are known as folklorists.
Folklores usually have morals and lessons for life. English antiquarian,
William Thoms first coined the word folklore and used it in a letter to the
periodical “The Athenaeum”. (Encyclopedia Britannica) 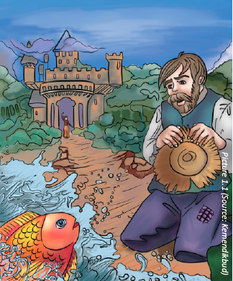 There once was a fisherman who
lived with his wife in a small hut close by the
seaside. The fisherman used to go fishing
every day. One day, as he sat in his boat with
his rod, looking at the sparkling waves and
watching his line, all of a sudden his float
was dragged away deep into the water. He
quickly started to reel in his line and
managed to pull out a huge fish. “Wow! This
will feed us for days.” Much to his surprise,
the fish started to talk and said, “Pray, let me
live! I am not a real fish; I am an enchanted
prince. Put me in the water again, and let me
me go! Have mercy o' kind fisherman.” The astonished fisherman quickly threw
him back, exclaiming, “I don't want to hurt a talking fish! Go on! Go where you
came from.”
When the fisherman went home to his wife, he told her everything that
had happened and how, on hearing it speak, he had let it go again. “Didn't you ask
it for anything?” said the wife. “No, I didn't, what should I have asked for?” replied
the fisherman.
“I am surprised you don't realize what you should have asked for. We live very
wretchedly here, in this nasty dirty hut. We are poor and I am so miserable. You
should have asked for a nice cozy cottage. Now go back and ask the fish that we
want a snug little cottage”, said his wife.
The fisherman wasn't sure about this but he still went to the seashore, sat
in his boat, went to the middle of the sea and said:

The fish immediately came swimming to him, and said, “Well, what is her
will? How can I help your wife?” “Ah!” said the fisherman, “she says that when I
had caught you, I ought to have asked you for something before I let you go. She
does not like living in our little hut, and wants a snug little cottage.” “Go home,
then,” said the fish, “She is already in the cottage!” So the fisherman went home,
and saw his wife standing at the door of a nice trim little cottage. “Come in, come
on in! Look at the beautiful cottage we have.” Everything went fine for a while, and
then one day fisherman's wife said, “Husband, there is not enough room for us in
this cottage, go back to the fish and tell him to make me an emperor.” “Wife,” said
the fisherman, “I don't want to go to him again. Perhaps he will be angry. We
ought to be happy with what the fish has given us and not be greedy.” “Nonsense!”
said the wife; “The fish will do it very willingly, I know. Go along and try!” With a
heavy heart the fisherman went to the middle of the sea and said:

“What would she have now?” said the fish. “Ah!” said the fisherman, “she wants to
be an emperor.” “Go home,” said the fish; “She is an emperor already.”
So he went home and he saw his wife sitting on a very lofty throne made of
solid gold, with a great crown on her head full two yards high. And on each side of
her stood her guards and attendants in a row. The fisherman went up to her and
said, “Wife, are you an emperor?” “Yes”, said she, “I am an emperor.” “Ah!” said the
man, as he gazed upon her, “What a fine thing it is to be an emperor!” “Husband,”
said she, “it is good to be an emperor.” They were happy for a while.
Then a time came when she was not able to sleep all night for she was
thinking what she should ask next. At last, as she was about to fall asleep, morning
broke, and the sun rose. “Ha!'” thought she, as she woke up and looked at it
through the window, “after all I cannot prevent the sun from rising.” At this
thought she was very angry, and wakened her husband, and said, “Husband, go to
the fish and tell him I must be Lord of the sun and the moon.” The fisherman was
half asleep, but the thought frightened him so much that he fell out of the bed.
“Alas, wife!” said he, “cannot you be happy with being such a powerful emperor?”

“No,” said she, “I am very uneasy as long as the sun and the moon rise without my
permission. Go to the fish at once!” “I don't think this is a good idea,” said the
fisherman but his wife wouldn't listen to him. “ Why don't you just go and ask the
fish to make me the Lord of everything,” she said.
Then the man went shivering with fear. As he was going down to the shore
a dreadful storm arose. The trees and the very rocks shook and the sky became
black with stormy clouds. There were great black waves, swelling up like
mountains with crowns of white foam upon their heads. Unfortunately the
fisherman did not have any choice, so he got onto his boat and rowed to the
middle of the sea and cried out as loud as he could:

“What does she want now?” said the fish. “I am truly ashamed of my wife's
greed but I can't do anything. She wants to be Lord of the sun and the moon.
“Go home,” said the fish, “to your small hut.” And it is said that they live there
to this very day. 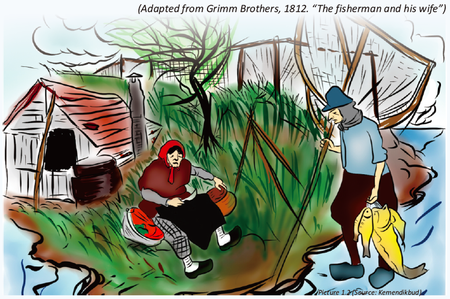 Suggest means to present a
suggestion that is to introduce
or propose an idea or a plan
for consideration.
Suggestions are abstract
and can be in form of
solutions, advice, plan, and
idea.
For example:
-Let's finish our homework first.
-Let's go home


Suggest means to propose a plan.
It can be accepted or refused.

Let's go to movies.
Why don't you do
your homework
before going out?
How about going to
Sam's place first and
then to the
supermarket?
I think you should go
and meet her.
Let's call it a day.

No, thank you. I do
not feel like going.
Sorry, I think I will go
out first and then do
my homework.
No, Let's just go to
the supermarket.
Sorry, I can't.
I have previous
engagement.
No, let’s stay for a
while.